The classic Ms Pacman game is ready and waiting for you to play it right now! Just like in Pac man, you have to collect all the little pellets to complete the levels and move on. See if you can reach level 256! No seriously, check out the videos below and be sure to check out the Ms Pacman history below before you go. Enjoy!

This is the HTML5 version of Ms Pacman although it mirrors the original 1980s arcade version perfectly in look and feel. The best part is that you can now play on your tablet, iPad, or phone and there is even a TURBO mode!

The Birth of Ms Pacman
Oddly enough, Ms Pacman started as a computer hack of Pacman by some really smart guys from the General Computer Corporation. For some unknown reason, the hack was dubbed "Crazy Otto". Weird, I know but read on. Making a hack version of Pacman was nothing new but the interesting part about Crazy Otto is that it was actually fun to play. Its creators decided to show it to Midway, the American distributor of the Company Namco who made the original Pacman game. Low and behold, Ms. Pacman was born.
6 ways Ms Pacman is different from Pacman
What?! You mean there's more than just the bow thing?! Yeah and it turns out that Ms Pacman made some big time improvements over its predecessor. Here's the list as I know it: 1) Ms Pacman has a bow, lipstick, and mole 2) There are now 4 maze styles to play on - each of which can be combined with various color schemes. 3) All but one of the new maze designs contain 2 sets of warp tunnels which connect the level from left to right (or vice versa) 4) New music and new intermissions 5) Fruit now enters via the warp tunnels 6) Clyde, the 4th ghost in Pacman, had a sex change operation (kidding!) and became Sue
Atari 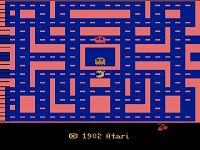 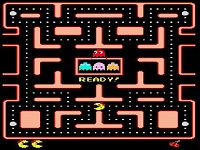 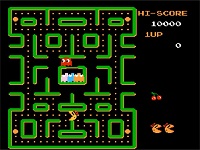 US Reception of Ms Pacman
Ms Pacman turned out to be a big hit. In fact, it became one of the most successful Atari games ever. Namco, the original developers of Pacman, decided they wanted a piece of the pie. Since Midway had developed the game "un-authorized" and without licensing from Namco, Midway had no choice. Namco acquired the rights to Ms Pacman in 1982 and dropped Midway as a partner in 1987, becoming Atari's partner instead. Through the years, many Ms Pac Man products were launched including plush toys, t-shirts, children's clothing, and even Ms Pacman cereal (see video below)
Funky Levels & Buggy Code Lead to "Secret" Levels
Ever reach level 142 or 256 and wonder - who turned out the lights? Thing is, level 142 loads some rather buggy data and so the maze and pellets appear blacked out. Level 256 looks the same but for a different reason. As many nerds will tell you, a byte can only contain up to number 255. 256 causes an overflow, a bug, or what have you and before you know it your playing Ms Pacman in the dark. You can watch a video of this below.
Ms Pacman Cereal Commercial
Level 256
Contact
Privacy